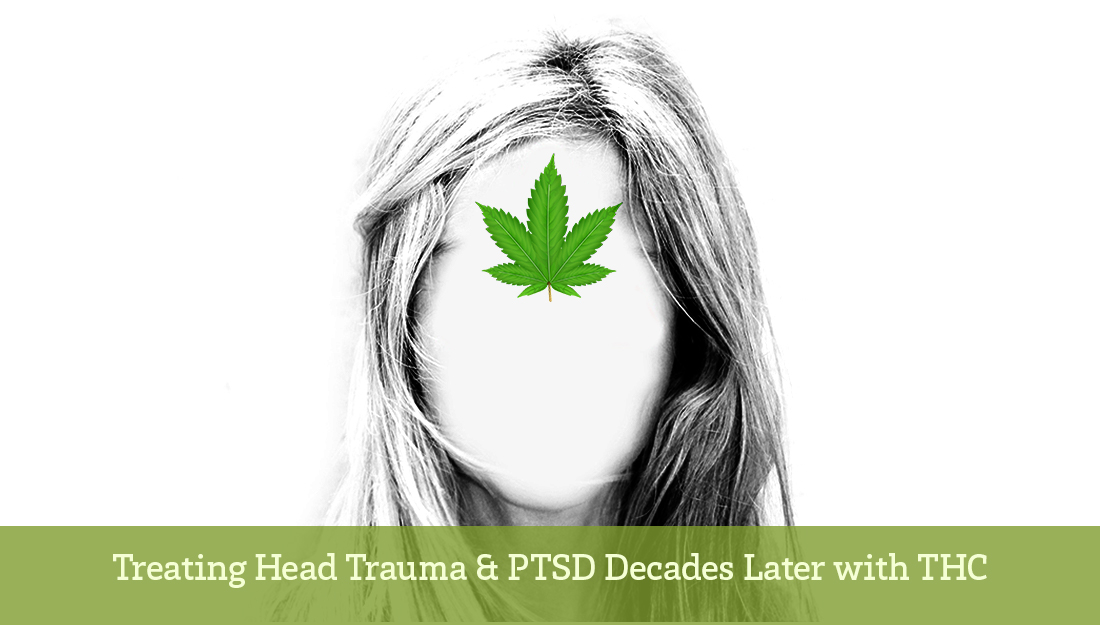 At Canuvo we budtenders hear many stories from our patients/customers about their physical conditions.  We have all learned about various afflictions by listening, asking questions, and personally researching specific ailments, so that we may better meet the needs of our clientele.

Sometimes we get an overview of a person’s life, one that gives a broadstroke view of her health’s progression from when she was small to now, whenever “now” is.  Because cannabis works subtly to benefit us, we can see the effect of medical marijuana best over time. That is the case for the following story, which begins over six decades ago.

Diana’s first episode of head trauma occurred before she was four years old.  (She is now approaching 70.) If she had suffered a concussion only the one time, perhaps she could have recovered fully.  If the post-traumatic stress disorder (PTSD) she developed had been diagnosed and treated while she was still young, her life may have been quite different.

Unfortunately, repeated head trauma throughout her younger years appears to have predisposed Diana to post-concussion syndrome (PCS), a debilitating condition that can follow a traumatic brain injury and may include headaches, dizziness, anxiety, memory loss, and other physical and cognitive symptoms.  Certainly, when she has suffered similar head trauma over the years, the symptoms of PCS have recurred as they occurred when she was less than four years old.

PTSD is itself an easily “triggered” condition that can drive a person to seek relief in extreme manners.  Diana preferred to medicate with alcohol for most of her life, and she was on prescription drugs for years, including four years on morphine.  In the early 2000s Diana chose to stop drinking and has been sober since then.

Before 2016, Diana had suffered several concussions.  By that year she had lost the vision in the center of her right eye, for no reason that she could identify.

In the fall of 2016 Diana was involved in a car accident and received a concussion that was undiagnosed.  She consequently found herself in a nursing home where she stayed for thirty days. Then she was sent home — with no assistance.  Very soon thereafter, she fell at home and was unable to get up. Her injuries rendered her unable to get in and out of bed, or to walk by herself.  She needed help to stand and had to use a walker to ambulate.

Over the next seven months Diana lost everything, and not just financially….

During that period, she suffered loss of vision, especially in her right eye.  She lost visual focus and had periods of extreme dizziness. She developed synesthesia, a condition in which one sense (for example, hearing) is simultaneously perceived as if by one or more additional senses (such as sight or smell), a confusing and frightening experience.  She could not be touched physically and found the pressure of clothing unbearable, especially on her arms, hands, and feet. Autoimmune diseases developed as well: She was diagnosed with Hashimoto disease, irritable bowel disorder, and celiac disease, as well as fibromyalgia, neuropathy, and migraine.  Her doctors prescribed high doses of prednisone and Cymbalta, both of which served to make Diana hyperactive and highly anxious. (It was also the worst withdrawal ever, she reports.) Her bowels became impacted. She had increasing difficulty walking. She was growing daily more desperate.

Diana used cannabis at first simply to help her rest.  She was very tired and in constant pain, and the long duration of her afflictions had opened the door to ever-increasing anxiety and depression.  She noticed quickly that cannabis helped her to relax and reduced her anxiety, and that she felt a little more positive about her life. She also realized that it helped her to be more sensitive psychologically — it did not dull her thought processes, it enhanced them.

Over the next several months she began to notice other effects cannabis was having on her health.  She realized her balance was better, and it continued to improve. She started walking again. In September she began to drive short distances.

Diana discovered at a routine eye exam in October 2017 that at some point in her history the retina in her right eye had partially detached, producing a blind spot in her vision.  The doctor examining her also reported that, remarkably, the damage was now healing. This could happen through a process called neurogenesis, an attribute that is being explored both positively and negatively in the scientific/medical research communities with regard to delta-9- tetrahydrocannabinol (THC) — one can check online for more information.  Subsequent testing shows that the vision in Diana’s right eye has significantly improved in the past two years, and she is convinced that THC is responsible for the regeneration of the nerves in her right eye.

What has cannabis done to help Diana’s life turn around?  She has less pain and less nervous “jangling,” as she calls a state of high anxiety.  Her physical balance is better, and so is her emotional balance. Her vision has significantly improved, especially in her right eye.  She is much less depressed and more balanced in her moods. She can walk and drive now. Her confidence is back, and her life is different — much! — than it was three years ago.

I asked Diana to choose a few significant benefits she had received from her use of medical marijuana.  She responded via email with this:

“On pondering the benefits which I have reaped from this miracle drug I must say that the apparent regeneration of function of my central nervous system is the most remarkable. This is evidenced by the documented improvement in my vision, memory, balance, pain and anxiety levels. I have come from a place of total dependence upon others for mobility and most activities of daily living to complete independence. It is my firm belief that the use of the medical cannabis has contributed generously to this miraculous improvement.”

That’s quite an endorsement!